The collateral effects of electric cars

Electric cars consume clean energy, but this is generated using primary energy sources which are not necessarily clean themselves. The development of electric vehicles will therefore bring about a new geographic and social distribution of pollution produced by transport.

Electric cars are the future. In France, the government aims at ending the sale of petrol or diesel cars by 2040. The Mayor of Paris wants to ban them by 2030. In India, only electric cars will be sold by 2030, according to the Ministry of Energy. Everywhere, governments are planning for a transition from internal combustion to electric power, which will be as significant as the passage from animal-drawn vehicles to automotives.[1] This revolution in transportation will not only reduce CO2 emissions. It is seen as the solution to the problem of air pollution which causes 500,000 premature deaths every year in Europe (according to the European Environmental Agency[2]) and 7 million worldwide (according to the WHO[3]). But what can we really expect? Will this truly be the end of the fine particles, nitrogen oxide, and ozone which cause respiratory and cardiovascular diseases and cancers?

Where do the clouds go?

The transition from fuel-powered to electric vehicles will modify the location of harmful emissions. With an internal combustion engine, pollution is produced where the energy is consumed by the vehicle user, i.e. on the roads  in and around major urban areas. The electric motor will shift this pollution towards the places which produce the energy used by the vehicles. For thermal power stations, the areas affected by pollution depend on the height of chimneys and local weather conditions, especially winds. Unlike for fuel-powered vehicles there is a big difference between the places the electric vehicles are used, the places where harmful emissions are released, and contaminated zones. Understanding the environmental impact of the transition towards electric vehicles is therefore not easy.

Pollution from cities in the countryside

This is a question which has been studied by economists S. P. Holland, E.T. Mansur, N. Z. Muller and A. J. Yates, who assessed the impact of electric cars on air quality in the United States. They collected data on emissions per mile for internal combustion engines for five types of emission: carbon dioxide (CO2), sulphur dioxide (SO2), nitrogen oxide (NOx), fine particles (PM 2.5), and Volatile Organic Compounds (VOC). They compared these emissions with those produced by the electricity consumed to travel the same distance for a similar model of electric car (for example, a Ford Focus, in fuel-powered and electric versions). To do so, they had to estimate the impact of energy consumption in KWh per mile travelled on emissions released by thermal power plants producing electricity locally. By taking into account road traffic, the release of harmful emissions into the atmosphere and the damage caused by pollution (on health, agriculture and forestry production, damage to buildings), they calculated a social cost for pollution in dollars per mile for each county in America.  Their results are illustrated in the two maps below, taken from their article published in the American Economic Review.[4] The colour for each county represents the social cost of a mile travelled in a Ford Focus. It goes from green, for low costs, to red for high costs. The first map shows costs for the fuel-powered version of the Ford Focus. The second map is for the electric version. 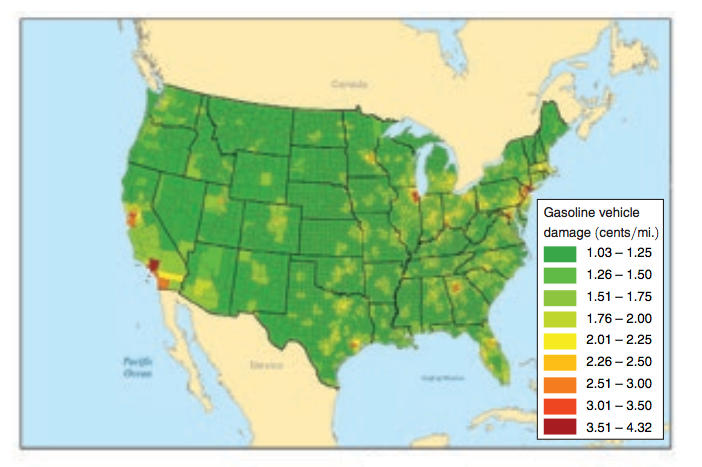 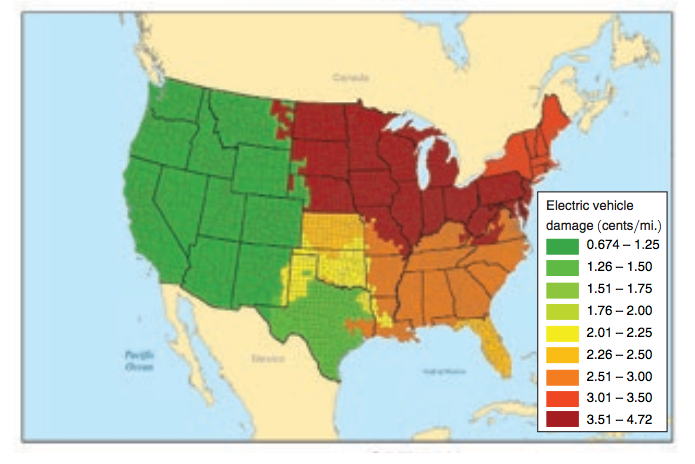 The first map clearly shows that the social costs of car emissions are concentrated in major American cities. New-York, Atlanta, Chicago, Los Angeles, San Francisco or San Diego have high pollution levels which make the additional emissions per mile in a Ford Focus very costly for the health of their residents. This cost is 3.16 cents in New York, 3.85 cents in Los Angeles and 2.98 cents in Chicago. However, in rural counties, the social cost is very low - around 1.2 cents on average.

Replacing the fuel-powered Ford Focus with its electric version has two effects on social costs per mile. First, the electric car shifts pollution from cities to the countryside. Let’s look at the case of an average-sized city, such as Fargo in North Dakota (which was made famous by the Coen brothers’ film). While the social cost of pollution in Fargo is just 1.54 cents per mile in the fuel-powered Ford Focus, this cost rises to 4.61 with the electric version. Switching to an electric car therefore generates an additional cost of 3 cents per mile. Second observation: the environmental impact relies on the source of energy for electricity generation. The impact is broadly positive for western states such as California, which mainly uses natural gas and hydropower plants to generate electricity. However, replacing fuel-powered cars turns out to have negative effects in northern states such as North Dakota, where electricity is mainly generated by burning coal.

We should therefore not see the electric car as a panacea. It does not solve all the problems, but shifts them to other places, which has significant redistributive impacts. An improvement in air quality in Hollywood or Manhattan, which is made at the expense of air quality in Fargo, does not affect the same people. And these people do not have similar levels of income. In another article,[5] the same authors show that the transition to electric vehicles is regressive: the poorest people lose out, while the wealthy benefit from it.[6] This has implications for public health, as those who are most exposed to pollution will have fewer resources to access treatment.

Reconfiguration of the electric industry

These findings show that we cannot avoid a debate about the energy mix. The environmental impact of the transition towards exclusively electric-powered vehicles and homes[7] depends on our sources of electricity production and distribution. More electric cars means more electricity and therefore more particulate matters emitted from coal-fired power stations in India and more nuclear waste in France. It also means more wind turbines, dams, or solar panels, and new lines to transmit the electricity from production sites to charging stations with sufficient capacity for rapid charging. The mobility revolution must therefore go hand in hand with a similarly radical a change in the production, transmission, distribution and provision of electricity. The environmental and public health issues caused by this double technological shift must be addressed by governments if they want to avoid exacerbating inequalities between people living in urban and rural areas.

[6] See, for example, in the article mentioned in Figure 4, page 20, which clearly shows a positive correlation between income levels and environmental benefits from the electrification of vehicles.

Supergrids: Cooperation must go with the flow

The windfall profits from renewables