Electricity - clean to use

In today’s new world, an aspect of the energy transition is the intention to decarbonise energy production. It follows that tomorrow’s energy sources will be predominantly electric. There are nevertheless major differences of opinion as to the qualities of electricity production methods, whether they be nuclear, wind, photovoltaic, hydraulic or the burning of fossil fuels. By contrast, consensus seems to reign when it comes to the quality of electricity at the point of consumption.

1. The future is electric

The Roadmap for moving to a competitive low carbon economy in 2050 published by the European Commission (EC) in March 2011 fixes a target for reducing greenhouse gas emissions by 80% compared to 1990 levels. As we can see in the graph below, in order to meet that goal, the EC plans to have almost zero emissions from the electricity industry, as well as a drastic reduction in the residential and tertiary sectors, in industry as a whole and in the transport sector. These results can be achieved only by a new technology mix and changes of behaviour, along with a massive move from polluting energy sources that are currently used at consumption points, towards electricity 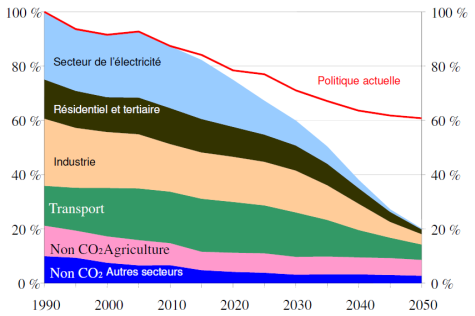 One of the reasons why electricity was so successful in the 20th century, despite the complex networks required for its supply, was its green credentials in the places where it was consumed. Admittedly, electricity does release some heat, as well as noise from poorly soundproofed motors, and does involve some danger in the handling of electrical appliances, but it generates no smoke, dust, or fine particles (PM2.5)[1]. The fact that large European and North American cities, previously notorious for their smog, have been able to attain a state of approximately breathable air, is largely thanks to the replacement of wood and coal – burnt in heaters and stoves – with natural gas and electricity. The air pollution in large Chinese cities[2] serves as a reminder of the state of our own major cities just a few decades ago.

Today, the main source of pollution in American and European cities is transport. Public transport, car-sharing, two-wheeled transport and greener forms of transport are key to cleaning up our urban air. And just as the use of electricity for heating[3] – in conjunction with better insulation of homes and offices – will curb polluting emissions in the residential and tertiary sectors, so too will the use of electrically-powered transport improve the well-being of city dwellers in terms of the quality of their local environment.

We have already mentioned heating, cooking and transport – areas in which electricity has substitutes. This is also true for lighting, as well as hot water, which can be heated 'on demand' or heated in advance and stored.

However, we also have to consider the development of services for which electricity has no substitute: household appliances, domestic and business equipment and air conditioning. A growing number of households are equipped with appliances for grinding, cooking and storing food, and for washing and drying. Homes and offices are increasingly being equipped with surveillance, regulation and protection systems. All this equipment requires an electrical power supply, hence the ever-increasing demand for electricity. But two more recent uses are amplifying our energy requirements: air conditioning, and ICT equipment and devices.

Southern European countries have followed the example of the USA by installing air conditioning units in their homes and offices, which has resulted in changing (sometimes) peak electricity usage levels from winter to summer. Further north, this has not yet become a necessity, but things are changing under the dual influence of the threat of global warming and the reduction in the cost of air conditioning equipment. Of course, in the long term it would be more efficient to properly insulate buildings, but the cost is disproportionate for the existing stock, and the pace of new building is too slow for any significant results to be seen in the medium term.

In terms of information, communication and entertainment systems – including in public places – one cannot fail to notice the massive increase in energy requirements, and this does not even take into account energy-consuming equipment that remain hidden, such as data centres.

The main problem with electricity is that "it is not a source of energy but a vector of energy i.e. the form that the energy takes for its transport and storage".[4] We do not want the gains achieved by greater use of electricity to be eroded by a degradation at production sites. To ensure a positive net outcome, it is vital that the electricity used for heating must not be produced from fossil fuels. If electricity is produced in coal-burning power plants, and house gas heating replaced with electrical heating, the result will inevitably be an increase in greenhouse gas emissions.

In addition to pollution problems, we must ask ourselves whether this transport vector (in time and space) is sufficiently efficient to compensate for energy losses caused by its conversion to electric power. Hydraulic, solar and wind power directly transform primary energy into electrical energy. However, thermal sources must undergo a heat-work transformation process, which produces conversion losses in the form of heat. This can be as high as 50% in traditional power plants. Therefore, whatever we do at the point of consumption with thermal electricity, we still have to burn over double the amount of energy on production sites than would have been necessary were it possible to use this energy directly. This explains why thermal regulation, which aims to reduce primary energy consumption, is not favourable to electricity.[5]

Another problem is storage. Our ancestors stored their wood or coal as close to their fireplace or stove as possible. We cannot store electricity except in small quantities e.g. in our portable devices. Until very recently, the electricity industry counted on the reliability of the production and transportation system to cope with changes in demand. With the rise in power of intermittent energy sources comes the problem of organising a reliable supply system. At the consumption site, part of the solution could be provided by reducing consumption – voluntarily or not – according to the lack of sun or wind. Storage solutions are an important piece of the answer: storing heat and storing electrical energy. So, goodbye coal cellars, wood piles and oil tanks, and hello heat accumulators and domestic batteries![6] In a future where most electricity will come from intermittent energy sources, the main problem will be that of space (domestic or tertiary). But on the positive side, there will be no dust and no unpleasant odours.

Promoting the use of electricity in the domestic, tertiary and transport sectors will require decisions that favour urban cleanliness over industrial pollution. This is true in France thanks to a reliable energy supply that does not produce high levels of greenhouse gases. However, it is not the case in countries where coal is still the main source of energy.[7]

Throughout the world, one of the keys to reducing our reliance on carbon will be brought about by improving thermal efficiency at all stages, including the consumption stage. Maintaining or even improving quality of service while reducing our primary energy consumption is a technical advance that would benefit all of us. Law n° 2015-992 dated 17 August 2015 on energy transition for green development[8] defines the main principles for renovating buildings, developing green transport and combating waste. To assess its effectiveness, we will

[1] Fine particles are particulate matter (PM) the diameter of which is less than 205 micrometers. They are able to penetrate the pulmonary alveoli.

[2] According to "Air pollution in China: Mapping of Concentrations and Sources" available at: berkeleyearth.org/wp-content/uploads/2015/08/China-Air-Quality-Paper-July-2015.pdf air pollution is responsible for 17% of deaths in China. To view this very detailed map, see:berkeleyearth.org/usa-europe-press-release-image.

[3] Currently, 31% of French households heat their homes with electricity: www.ademe.fr/particuliers-eco-citoyens/habitation/construire/chauffage-climatisation

[5] In France, and in accordance with Article 4 of the Grenelle 1 Law, the aim of thermal regulation RT 2012 is to limit the consumption of primary energy in new buildings to a maximum of 50 kWhPE/(m².year) on average; www.developpement-durable.gouv.fr/Chapitre-I-La-reglementation.html

The conversion factors of final energy into primary energy (PE) are 2.58 for electricity, 1 for other forms of energy (Decree dated 15 September 2006 on the energy performance evaluation for existing buildings offered for sale in mainland France).

[7] See www.statistiques.developpement-durable.gouv.fr/publications/p/2012/995/levolution-mix-electrique-monde-entre-1980-2010.html. This was still true in the USA until recently. However, since April 2015, coal use (30.2% of electricity production) was replaced by natural gas use (31.5%): seewww.eia.gov/electricity/monthly/epm_table_grapher.cfm?t=epmt_1_01