Road traffic is choking the world’s cities, with disastrous consequences for our climate, health and economies. In the US alone, the annual cost of congestion in lost time, wasted fuel and carbon emissions is estimated to be $87 billion. Optimizing the development of today’s increasingly complex urban transport systems is a key target for the TSE Infrastructure & Network Center. In a new working paper, TSE’s Isis Durrmeyer and PhD student Nicolás Martínez construct an innovative model to analyze existing efforts to free up our car-clogged streets.

Which policy tools are usually used to curb traffic?

Driving restrictions are a command and control instrument. They are relatively simple to implement, requiring only compliance controls, and often used as temporary measures during pollution peaks. Paris has used alternate traffic restrictions based on license plates six times between 1997 and 2016. Since 2017, emergency restrictions have been based on car vintage and fuel type combination.
Many other European cities have instead opted for road tolls. Stockholm and London use congestion charges, restricting access to the city center during peak hours to those who pay a fee. These price mechanisms have the advantage of sorting individuals according to the benefits they get from driving: those who stop driving at peak hours have good transport alternatives or fewer schedule constraints. Driving restrictions affect all individuals identically, which seems inefficient. In addition, road tolls generate tax revenue that can be redistributed to individuals, mitigating the welfare costs of traffic regulations.

What are the challenges in studying such policies?

Changes in road traffic are difficult to predict because the road traffic level is the consequence of transport decisions made independently by individuals. These decisions affect everyone as car speeds and individual trip durations depend on the traffic level. Predicting individual reactions to a change in the transport environment – such as new regulations or traffic jams – requires knowing how the road traffic equilibrium is modified after individuals make their transport decisions. Observational studies that measure the direct impact of a change in the transport environment are limited by only being able to compare two equilibria, failing to separately identify the reactions of individuals.

How do you model these individual reactions?

We develop a novel framework to analyze how individuals respond to changes in the transport environments of Paris. The first part of the model represents choices regarding transport mode and departure time for daily trips to work or places of study. Individuals differ in their travel patterns (origin, destination, and itinerary), access to transport modes, and schedule flexibility, so they are likely to react differently to a policy. The second part of the model represents the congestion technologies – such as type of road, traffic lights, and intersections – that determine how driving speeds react to changes in traffic density.
This model has three innovative aspects. First, it represents transport decisions for the entire metropolitan area rather than focusing on a specific road. Second, it allows for differences in congestion technology across the city. Third, all the model parameters are estimated and represent the joint distribution of preferences, trip distances and itineraries, individual characteristics, and choice of transport mode.

Which data do you use to develop your model?

We rely on a survey sample of 12,975 respondents who provided details about their travel on the day before the interview. We supplement this data with expected travel times using Google Directions for public transport and TomTom for private vehicles. We estimate the congestion technologies using high-frequency data on traffic density and speed from 1,371 road sensors. We also use subway and suburb train ridership data to approximate overcrowding levels on the metro and trains.

What insights does your research offer about tolls and restrictions? 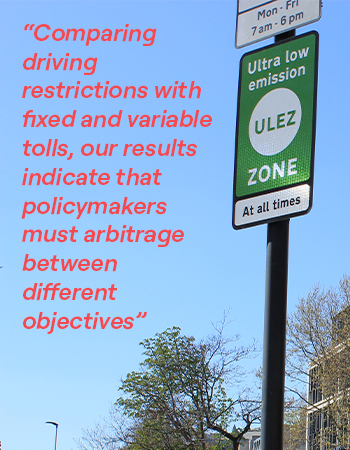 Comparing the effects of three simple peak-hour policies – driving restrictions, fixed tolls, and tolls that vary according to the distance travelled – our results indicate that policymakers must arbitrage between different objectives. The estimated parameters confirm the importance of trip duration for individual decisions and reveal profound schedule inflexibility, making it challenging to discourage individuals from driving at peak hours.

We find that all the regulations are costly for individuals despite significant speed gains. If toll fees are moderate and revenues are redistributed to individuals, both types of toll improve aggregate welfare. The uniform toll is best at maximizing the tax revenue. Although driving restrictions do not raise any revenue, they hurt individuals less than a uniform toll because they force everyone to contribute to traffic reduction while tolls must be high to induce the same traffic reduction. However, variable tolls are better at traffic reduction than the uniform toll or driving restrictions since they target long-distance commuters who contribute the most to congestion.

Weighing up the costs and benefits of each policy achieving 34% reduction in traffic, we estimate overall surplus losses to be between €0.7 million and €1.5 million. Tax revenues are between €0.87 million and €1.5 million, ensuring positive welfare effects once the tax revenue is entirely redistributed. We also measure the impacts of the policies on the emissions of carbon dioxide and local pollutants (nitrogen oxide, particulates, and hydrocarbons). The benefits from reducing emissions compensate only 2.4% to 4.5% of the surplus losses. Analyzing distributional effects, we find that variable tolls generate the most inequality. Individuals on long-distance trips that lack suitable public transport alternatives are the hardest hit.

Can the impact be softened by using more complex interventions?

We find that applying personalized tolls can increase welfare gains by 63% and emissions reductions by 27%, compared to the variable toll. More realistic policies – such as car vintage or fuel-based driving restrictions, area-specific or combined variable and fixed tolls, and driving-license auctions – do not perform significantly better than the simple ones. The best ancillary instruments to reduce policy losses appear to be connecting the 28.5% of the population which currently has no access to public transport, and improving public transport speed.

FURTHER READING ‘The Welfare Consequences of Urban Traffic Regulations’, as well as other publications by Isis on environmental and transport policies, is available to read on the TSE website.

Transport infrastructure: Ukraine, on the road to recovery

What future for motorway concessions?