Is it time to tax meat?

Despite the huge impact of the meat industry on the environment and our health, governments have paid little attention to its unsustainable global trajectory. The TSE Energy & Climate Center seeks to help policymakers evaluate the tools they might use to steer firms, innovators and consumers on to the path of the green transition. In this spirit, a new study by Nicolas Treich and his coauthors reviews the empirical evidence on the true costs of livestock farming and examines the politically charged case for taxing meat consumption.


Why has livestock farming escaped carbon pricing, even though it produces 14% of the world’s greenhouse gas (GHG) emissions?

Given the progress in other major polluting sectors, such as electricity and transport, the lack of regulatory focus on meat is striking. One explanation is that farm businesses are much smaller, with more varied emissions sources, than economic entities in other polluting sectors such as electricity and transport. This increases the monitoring costs for implementing policies.  Another explanation is that the regulation is captured by agricultural interests, as exemplified by the failure to green the Common Agricultural Policy over decades. Finally, potential breakthrough alternative protein technologies such as cultivated meat are only in early stages of development. This suggests a stronger role for taxes on meat consumption.

What does your paper reveal about the environmental costs of meat?

Robust empirical evidence already exists on environmental impacts of livestock farming, including the emission of air pollutants that accelerate global warming and cause major respiratory health issues. At the same time, nutrient pollution causes soil acidification and eutrophication of rivers and oceans that leads to harmful algal blooms, dead zones, and fish kills. Livestock land use is also responsible for most of the deforestation worldwide and we are just beginning to appreciate its catastrophic impacts on biodiversity. 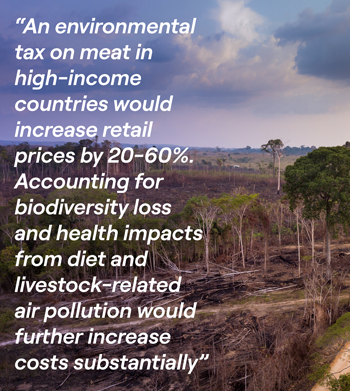 Even if we only consider the impact of ecosystem destruction, this would be enough to justify a ban on further expansion of agricultural land for animal farming.
Pricing meat to reflect these costs should be an urgent priority for regulators. To estimate the economic value of environmental damages, we build on a published meta-analysis of lifecycle assessments from thousands of farms worldwide. We show that meat is significantly underpriced, with the average external costs of beef due to impacts on climate change and nutrient pollution at US$5.75-US$9.17 per kilogram (lamb and mutton costs are $3.70, pork $1.94, and poultry $1.50). This suggests that an environmental tax on meat in high-income countries would increase retail prices by roughly 20-60%, depending on meat type. Accounting for biodiversity loss and health impacts from diet and livestock-related air pollution would further increase costs substantially.

What other social costs should policymakers consider?

In high-income countries, the detrimental health impacts of some meats are well established: red and processed meat increase risks for cancer, coronary heart disease, stroke, and type 2 diabetes. Although large-scale global health threats such as zoonotic disease emergence and antimicrobial resistance, as well as concerns about animal welfare, also provide a rationale for more stringent livestock regulation, our main focus is on the environmental externalities and diet-related health impacts for which there are robust empirical estimates.

How should a meat tax be designed?

The most efficient way to regulate the sector is to impose targeted externality-correcting instruments such as carbon pricing, nitrogen regulation, and ecosystem valuation. Such measures should ideally be consistent with pollution at the source. In the absence of such options, taxes on meat consumption provide an attractive alternative because they can help to achieve multiple policy objectives, require less monitoring effort and are relatively simple to implement.
The optimal tax rate depends on regulatory objectives and may not reflect the sum of external costs. This would be the case, for example, if a tax on GHG emissions from livestock has the co-benefit of reducing local nutrient pollution. Changing levels of meat consumption will also impact other forms of land use that are significant drivers of biodiversity loss. An optimal tax rate must therefore account for potential synergies between environmental externalities and interaction effects with unregulated adjacent resource markets.
Meat taxes also need to be evaluated on the basis of how much they reduce demand for meat. The evidence has been mixed thus far, suggesting that consumers are only moderately responsive to higher meat prices. Policymakers must also consider the environmental impacts of those goods that consumers choose instead when faced with higher meat prices.

How can policymakers lift the burden on poorer households?

A meat tax would fall disproportionately on low-income households because they spend a larger share of their income on food. The distributional impact of externality taxes is best corrected through the tax and transfer system, such as by lowering income taxes. However, when income taxes are not optimal or cannot be easily adjusted, adapting meat taxes to achieve distributional goals may be justified. Revenue recycling can also make taxation more progressive. If uniform lump-sum redistribution is not politically feasible, revenue could instead be used to reduce VAT on food or to subsidize fruit and vegetables.

How can we get meat producers on board?

Mitigating the negative effects of a meat tax on producers will improve its political feasibility. The impacts on livestock farmers are likely to depend on the local context, such as the possibilities for switching to other activities and the regulatory environment. One advantage of consumption taxes is that they apply to both domestic and imported products, alleviating competitiveness concerns. Compared with regulation through standards, meat taxes also create additional revenue that can be used to compensate producers and incentivize more sustainable practices.

Will the public support a meat tax?

The importance of meat in culinary traditions and social identity may explain the strong public opposition to meat taxes in some countries. In France, meat taxes are one of the most unpopular environmental protection measures. It is unclear whether this opposition is due to citizens’ lack of awareness of the mitigation potential of changing meat consumption, skepticism that meat taxes will reduce demand, or a sense that their “way of life” is under attack.
However, meat taxes have been shown to be more popular when combined with animal welfare standards, discounts on vegetarian meals, and information campaigns. Their appeal to consumers can also be increased by simultaneously lowering agricultural subsidies to meat farmers, introducing more stringent farming standards, and using tax revenue to support low-income households.

Nicolas’ article ‘Toward Optimal Meat Pricing: Is It Time to Tax Meat Consumption?’ is published in Review of Environmental Economics and Policy.