Producing electricity from the sun is a well-mastered technology. This is good news for the climate and an opportunity for people left out of the electrification network. But will it be enough to foster the development of emerging countries?

A spectacular drop in costs

Now that energy prices are skyrocketing everywhere in Europe, it is comforting to remind that the cost per kilowatt hour of electricity produced from photovoltaic cells has never been so low. That's one of the good news you will find in the next IPCC report: solar has become a competitive energy source compared to fossil fuels... whenever the sun shines, of course. While in the 1950s solar panels were confined to equipping satellites, they now cover houses, farm buildings, shopping malls and parking lots. Solar smartphone charging kits can be found in every camping equipment store. The last few years have seen a dramatic drop in the average production cost of the photovoltaic kilowatt hour (the "Levelized Cost of Energy" or LCOE, the flaws of which have been analyzed in our April 5, 2018 post). According to the International Renewable Energy Agency (IRENA) report, on average it has been divided by 5, from $0.378 to $0.068 between 2010 and 2019. According to the same report, the champions of the decline are India with $0.045/kWh and China with $0.054/kWh. As the graph below from the report illustrates, this drop in the cost of the average kWh far exceeds what has been observed for other renewable energy sources. 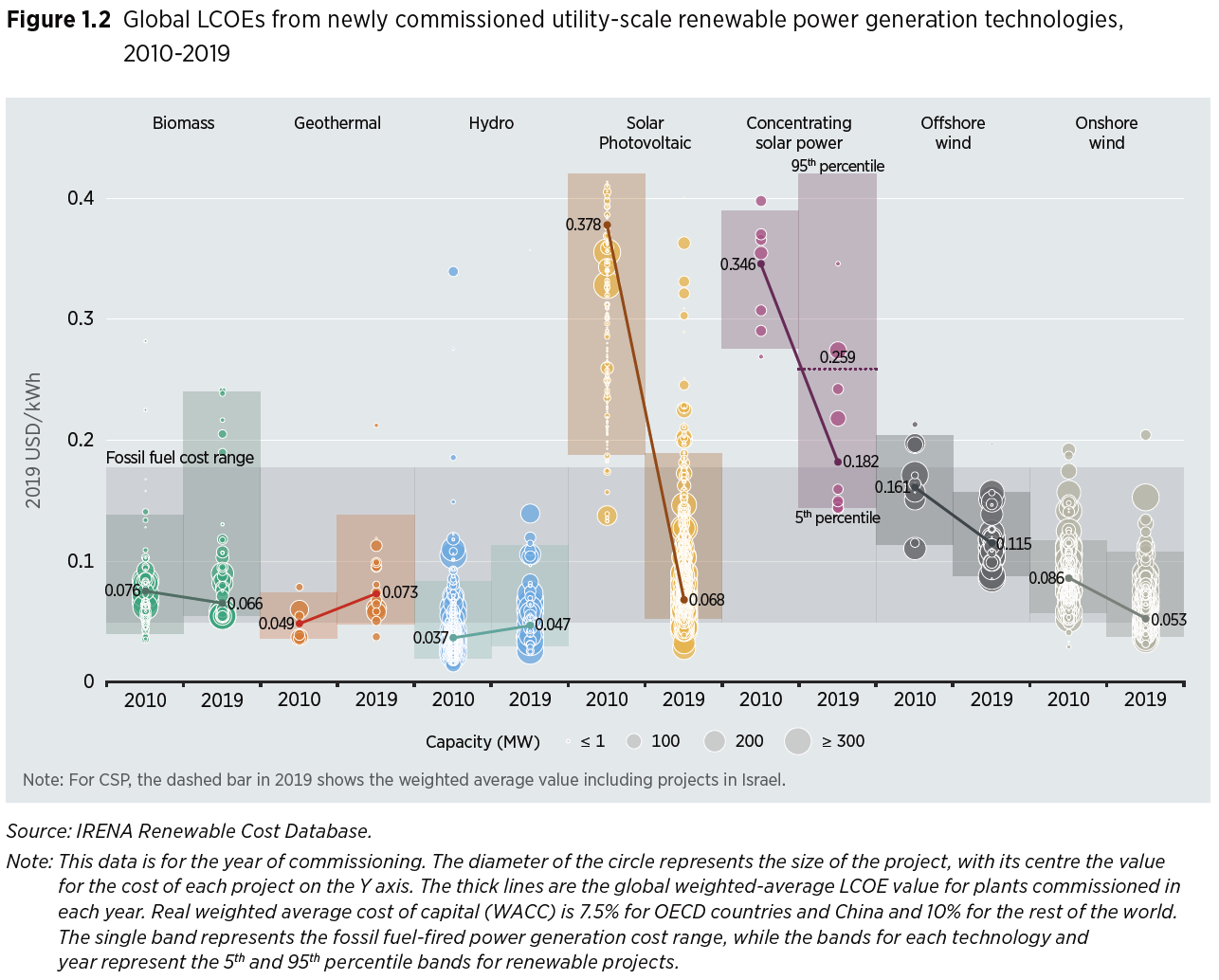 The graph also shows the importance of investment in generation capacity (yellow circles) as well as the competitiveness of solar over fossil fuel sources for electricity generation, which costs are represented by the lower dark gray band.

Electricity in war and peacetime

The other good news is that photovoltaics is a mature, robust, and widely available technology. It is a reliable alternative to the expensive and poor-quality grid electricity supply in many countries. As an example, Syrians converted to solar during the civil war (New York Times, 05/15/2021). The installation of solar panels coupled with batteries helped to offset the destruction of the electricity infrastructure. Thanks to solar energy, Syrians have been able to continue to light, have access to medias and communicate in a chaotic environment. Yet we should remind that, for uses in absence of sunlight, the cost of energy storage by batteries must be added to the cost of photovoltaic electricity.

Photovoltaic cells light up the homes of people located in areas left in dark on satellite photos of the earth at night. Children in rural Africa can study later at home thanks to solar lamps. This improves their school results but also their health as they breathe less particulates emitted by the combustion of wood and domestic fuel. Their parents can recharge their cell phones, which have not only social uses but also economic uses. It allows them to pay, borrow, save and find out about selling prices and outlets for their products. Photovoltaic panels are also playing an increasing role in water supply. With motorized pumps powered by solar energy, the flows taken from the groundwater can be used either directly for irrigation and distribution through standpipes, or to store them in surface ponds or water towers (Electriciens sans frontières).

Solar energy allows a technological transition from candlelight to electric lighting and from manual to electric pumps without network infrastructure. This leap in electrification by avoiding the construction and connection to a physical network somehow echoes the evolution of telecoms in poor countries where the installation of a wired network is no longer relevant. Will we do the same for electricity? Will we be satisfied with off-grid solar electricity when needs increase with economic development?

Technical and political limits to the development of solar energy

The electric light that replaces the candle is not enough. Households in emerging countries need more power to do their ironing, refrigerate food, watch television, and air-condition their homes. Shops need to store their goods at low temperatures, companies need to run their machine tools, hospitals need to store their medicines and power their electronic equipment. Economic development multiplies needs, increasing the demand for electricity beyond what a few square meters of photovoltaic cells can provide. Part of this increase in power can be achieved with mini grids of prosumers with significant production and storage capacities. This change of scale is not trivial. It requires a collective organization of the production and supply of electricity at the local level.

An article from the Energy Institute at Berkeley describes the difficulties encountered by the NGO Gram Power in installing and managing solar microgrids in India. Villagers can connect to a microgrid of solar panels at a price that covers the after-subsidy costs. That's more than what they would pay per kilowatt-hour from the grid, but with a better service thanks to the guarantee of uninterrupted power for a few hours a day. It turns out that Gram Power's offer did not generate the expected enthusiasm. The villages excluded from the electricity network preferred to believe the authorities' promises of an imminent connection to the network. Another pitfall for any network, large or small, is illegal connections and unpaid bills. In Gram power’s micro-grids, smart meters allow to track consumption in real time and thus detect theft and bad payers. Nevertheless, sanctions are rare. Disconnections are temporary and renegotiated with local officials. The problem is not technological but human. As explained in a paper from the Energy Policy Institute at the University of Chicago, politics is the main reason why grid electrification fails in India as in other emerging countries. Technology is not everything; good local governance is essential.

The decrease in the cost of electricity produced from photovoltaic cells open the door to a decarbonized economic development of the countries located in sunny Africa and Asia, those which have basic needs to satisfy to eradicate poverty. But an individual solar kit will not be enough when populations express growing needs. Experience has shown that scaling up through mini grids of prosumers is not easy. Low-cost decarbonated electricity produced on a large scale in emerging countries has yet to be invented.

On the rationality of electricity consumers