After the famous 20-20-20 target in 2020, the European Union has committed to carbon neutrality by 2050. Assessment and prospects.

The fifth anniversary of the Paris agreement on climate, December 10, was an opportunity for the signatory countries to reiterate their commitments to reduce greenhouse gas (GHG) emissions. The day before, the European Union (EU) announced a commitment to reduce emissions by 55% by 2030 compared to 1990 levels to set an intermediate reference on the trajectory of a distant carbon neutrality objective in 2050. These figures are the response of our governments to a public opinion increasingly concerned about the future of our planet. They do not imply that the implemented policies will be commensurate with the promises. What lessons can be learned from past experience to assess the potential achievement of this objective?

In this year of assessment, two out of three objectives have been achieved and even exceeded. Indeed, in 2019, the EU reduced its GHG emissions by 25% compared to 1990 and the share of renewable energies in energy consumption was 19.7%. This share is estimated at 23% for 2020. These good results are linked to a multitude of economic factors, some unwanted (decline in industry), others supported by public authorities (generous subsidies for solar and wind energy and the sustainability of the EU-ETS carbon market). On the other hand, energy efficiency performance is still underwhelming. The EU has reduced its energy consumption by only 9.8% in 2018 compared to 2005 for primary energy and 5.9% for final energy. Policies for the thermal renovation of buildings have not produced the expected results.

In 2020, the EU committed to a further 30% reduction in GHG emissions by 2030 compared to current emissions and then to zero net emissions in 2050. How to achieve carbon neutrality in 2050? It is not only a question of drastically reducing our emissions but also of absorbing incompressible emissions through carbon sinks. In its Communication, the European Commission presents the graph below, which provides a key to the distribution of emissions and their absorption in order to reach the target. 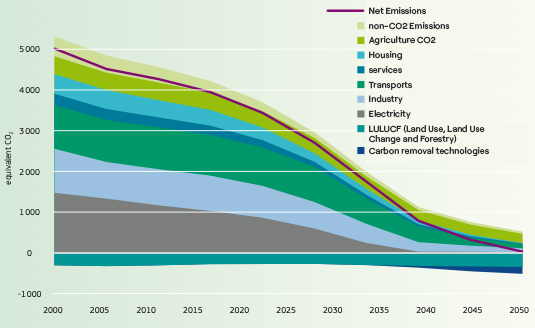 The reduction of emissions linked to electricity production (in grey) will have to accelerate in order to reach a completely decarbonized electricity mix in 2040. Emissions from transport (dark green) and industry (light blue) will need to be significantly reduced. Absorption will take place by biomass (dark green under the x-axis) at a constant rate. It will be complemented by carbon capture and sequestration technologies (in dark blue under the x-axis) that will be deployed from 2035 onwards, whereas they are currently rarely used (outside oil extraction) because of their immense costs.

Do you speak LULUCF?

The acronym LULUCF (Land Use, Land Use Change and Forestry) refers to the net emissions (or net removals) of GHGs from land use. Much of the carbon is sequestered naturally in plants and soils. Some natural environments such as forests and peatlands are carbon sinks because they absorb more GHGs than they release. The dynamics of land use in agriculture accentuates or, on the contrary, destroys this absorption capacity. Carbon sinks are created by the conversion of cropland to pasture or pasture to forest. Conversely, deforestation releases sequestered carbon in addition to depleting the sink. The carbon neutrality scenario imposes a land-use dynamic that enhances GHG absorption, and thus public policies that promote reforestation, preservation of wetlands and agricultural practices that are moving in the right direction.

A recent report highlights the inadequacy of the measures of the Green Package and the Common Agricultural Policy to achieve the objective of carbon neutrality. The authors point out that the emissions attributed to changes in agricultural land use are of the order of 30 million tons of CO2 equivalent per year. They note that carbon sinks have been reduced since 2010 at the European level. They conclude that carbon neutrality cannot be achieved without a drastic change in public policies in agriculture.

Emissions out of sight

Another difficulty is the way the carbon footprint is calculated. The balance will not be the same depending on whether one counts the GHG emissions produced on the territory of the EU or those produced by the consumption of its population. In the first case, the emissions linked to the production of exported goods are included while those linked to imports are excluded. The difference can be significant. In its October 2020 report, the High Council for the Climate emphasizes that, while France's GHG emissions have decreased since 2005, the carbon footprint of its imports has continued to increase. Similarly, emissions related to international transport have increased by 50% since 1990. They have even doubled for air transport.

Achieving carbon neutrality in Europe will be all the easier if we ignore imported emissions and those related to international trade. But this is a miscalculation since it consists in blaming countries outside the EU for the GHG emissions linked to our consumption while all these GHGs will accumulate in the Earth's atmosphere, wherever they come from. It is the responsibility of the EU to include the emissions related to all goods consumed by its population regardless of their origin. The commitment to carbon neutrality in 2050 therefore requires a review of the Union's trade policy to promote the decarbonisation of its imports. As we pointed out in a previous post, the multiplication of free trade treaties orchestrated by the Commission with countries known for their poor carbon balance, such as Brazil, Canada and Australia, will tend to increase the carbon footprint of our imports, and thus move our emissions out of the EU territory instead of eradicating them. In some cases there will even be a net increase when production patterns favour deforestation (in Brazil) and the use of fossil fuels (in Australia).

The climate objectives are promises whose main virtue is to set targets for public policies. The EU's 3x20 objective in 2020 justified massive subsidies to renewable energies which have greatly contributed to the decarbonation of electricity production. The "carbon neutrality by 2050" objective is much more ambitious. Beyond the additional efforts to be made in industry and transport, it requires a reorientation of the Union's agricultural and trade policies. The future will tell us which flagship measures, potentially painful for some economic sectors, will be adopted. See you in 30 years' time for a new assessment.

Barriers to the exit of fossil fuels