The Citizens' Climate Convention set up by President Macron has placed the energy renovation of buildings at the heart of the debate on the post-Covid recovery plan. This enthusiasm for thermal insulation, long perceived as a profitable opportunity in addition to being climate-compatible, is turning its back on the results obtained in the field.

What are the technologies that will reduce greenhouse gas emissions at a lower cost? In response to this question, the consulting firm McKinsey published a graph in 2007 that represents an estimate for 2030 of the cost per ton of CO2 avoided by implementing various emission reduction strategies. 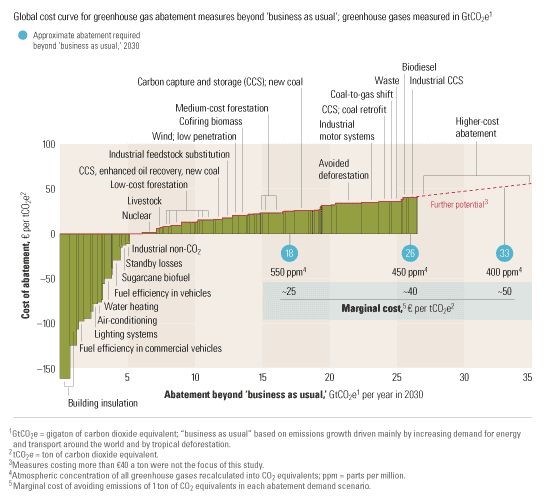 The winning technology in this ranking is building insulation, with a negative cost, i.e. a gain of more than 150 euros per ton of CO2 avoided! In other words, it is a "win-win" solution that should make CO2 emissions reduction profitable: the cost of insulation is largely offset by the expected future savings on the energy bill.

In line with these calculations, in many countries public authorities have implemented policies to promote the insulation of old buildings. There is, however, a paradox: if insulation is so economically advantageous, it is in the interest of the occupants (households, shopkeepers, industrialists) to undertake energy renovation work, even without subsidies, unless they are tenants or their bank refuses to give them a loan, in which case a state-guaranteed loan should lift the financial lock. Given the forecasts of McKinsey's experts, economic rationality should therefore be sufficient to induce homeowners to insulate their homes, especially with this financial aid, which is a windfall effect. This is not what we have seen, particularly in the United States.

The U.S. federal government has set up a program to help the most disadvantaged take full responsibility for the energy retrofit of their homes. Poor households can have work done at an average cost of $5,000 without paying anything out of their own pocket. A study conducted in 2015 tried to understand why a very small number of eligible households participate in such a generous program. Is it because of a lack of information? Is it an aversion to administrative procedures? Researchers randomly selected 30,000 eligible households in Michigan, half of which benefited from a promotional campaign: letters and phone calls to publicize the program and logistical support to put together an application file. This relatively expensive campaign ($450,000) increased the participation rate, but the increase was small.

Comparing the households that benefited from the promotional campaign with others, the application rate for the program increased from 2% to only 15%. In the end, 6% of those who received support to participate in the program completed the work compared to 1% for the others. The rate of completion of the work conditional to submitting an application is not higher for those who have benefited from the promotion program. The authors of this study conclude that information and transaction costs are not the main obstacles to energy retrofits. The low uptake of this type of program can only be explained by non-monetary costs, such as noise and dust caused by the renovation work.

What does the bill say?

Various studies have estimated the energy savings achieved and compared them with those expected in energy retrofit programs. They all show that we are far from the mark. The fraction of savings achieved compared to those predicted varies from 30% to 58% depending on the study. If we compare the cost of the renovation with the energy savings, the investment does not always prove to be profitable, contrary to what McKinsey had suggested. In the sample of 30,000 households in Michigan, the annual rate of return is estimated at -7.8%, which brings the cost per ton of CO2 avoided to 200 dollars, and thus puts building insulation in last place for decarbonization solutions as estimated by McKinsey. In France, a study based on survey data leads to the same conclusion of negative performance of energy renovation. With 1,000 euros of work, an average reduction in the bill of 8.4 euros per year is obtained. To offset the initial investment, you have to wait ... 120 years!

This discrepancy between expected and actual savings, known as the "energy efficiency gap", is partly explained by overly optimistic assumptions in the simulation models used by engineers. But this is not the only reason. Breaking down all insulation measures for walls, ceilings and windows, a 2020 study estimates that projection errors explain 41% of the gap. The rest is largely due to the heterogeneity in the quality of the work carried out: the authors estimate that the gap between planned and realized energy savings would be reduced by 43% if all the work was carried out by the top 5% of renovation companies.

Information asymmetries in the renovation market

Although thermal insulation is a simple and mature technology, its performance is highly variable. It depends on many factors such as the type of building, the materials used, the heating system, the thermal bridges, the climate, the skills and involvement of the technicians in charge of the building site. A wide range of insulation materials and techniques are available on the market. It's not easy to make a choice when you're not an expert. Unless you carry out the work yourself, the energy efficiency of your home is left in the hands of one or several professionals who are supposed to do the best at the lowest cost. This creates a problem of moral hazard that was highlighted in an article published in 2018. As the owner does not have the expertise to ensure the quality of the work, there is a strong temptation for the craftsman to botch up the site with entry-level equipment. Regardless of the energy savings made, it will be paid for by the owner (and taxpayers via the subsidy). If it turns out that the expected energy savings do not bring down the bill, it will be too late to hold them accountable. The authors document the existence of this moral hazard. They show that energy efficiency is lower (i) for work that is more difficult to observe, such as attic insulation, and (ii) when it is done on Fridays rather than other days of the week.

This moral hazard is coupled with an adverse selection problem because it is difficult for a homeowner to evaluate the competence and honesty of renovation professionals. Competition in the presence of adverse selection pulls quality down through a mechanism known as the "market for lemons". Since customers lack the skills to distinguish between good and bad professionals, only those who succeed in lowering costs survive by cutting back on quality. As a result, competence and performance are not sufficiently remunerated. In the end, the owners give up investing, or do so for small jobs that are partly subsidized by taxpayers.

The energy renovation of buildings is one of the options for decarbonizing the economy. While it is socially desirable, it is not profitable for owners without subsidies as long as energy is cheap. Financial aid is not everything. The state must also better regulate the energy renovation sector and professionals in the sector must better discipline themselves to ensure that the promises of energy savings are fulfilled.