The flexibility of the electric system

With a lack of sufficient storage capacity and consumer habits which do not line up with the offer provided by solar and wind power, the growing importance of variable renewable energy in the production of electricity is forcing producers to maintain replacement capacity. This capacity must be flexible enough to respond to the vagaries of Aeolus and Helios.

Of gods and men

In the beginning, things were simple. The gods would frolic on Mount Olympus, playing out their love affairs and jealousies, and men had to adapt to the celestial order of the day... or die. Night and day, changing seasons, clouds and rain, winds, earthquakes, volcanic eruptions and tsunamis, without forgetting floods, locusts, or other disasters, all these would force men to change their diet, take shelter in a cave, run faster, learn to swim, or disappear. But one day the gods became careless, and made the error of leaving a cudgel lying about (or a big bone, if Stanley Kubrick is to be believed). Man seized this tool, and the world was forever changed. Man could now decide to microwave a frozen pizza, go skiing in Dubai or watch kittens on smartphone screens. To do all of this, he needed to free himself from the petty whims of the heavens and of Nature. After a few false starts over the centuries, man devised a system of electricity which was able to deliver enough energy to keep the beers cold while the tarmac on the roads of the Tour de France was melting. But the gods took this badly; they invented climate change. They decided that the earth's atmosphere would not be able to absorb all the waste generated by man, in particular the CO2 emissions produced by thermal plants. Rather than risk a confrontation, men and gods came to an agreement: man could keep electricity, but only if it was produced by what came from above; he would have to forget about what comes from below - it is toxic, even for the lungs of deities. As with any agreement, both parties needed to think about how it could best work for them. For men, the logic was: "sooner or later, we'll invent storage; in the meantime, let's try to be flexible".[1]

Peaks and troughs in the production of renewable energy

To get a good grasp of the problem, let's look at the production of solar energy in France on 23 and 30 April 2016.[2] It will come as no surprise that there are fluctuations between day-time and night-time cycles. The length of these cycles changes with the seasons: in France, at the summer solstice, production starts a little after 6 am and finishes around 9 pm; at the winter solstice, it runs between 9 am and 5.30 pm. Then there is the intensity of light: very weak when the sun is low on the horizon, then rising fairly regularly before dipping and disappearing. Intensity is also stronger in summer than in winter.[3] So, the curve we see here rises at the same time as its base widens, more or less regularly, going from winter to summer. And then there are clouds and fog, which can slow the panels down when powering up, as we can see in the rising section of the curve on 23 April compared to 30 April. Cloud coverage can also lead to spikes, like the ones which appear at the peak of both curves. 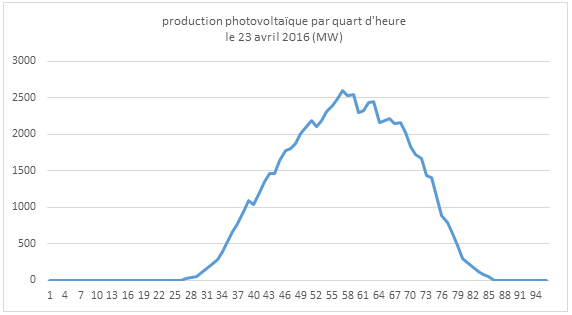 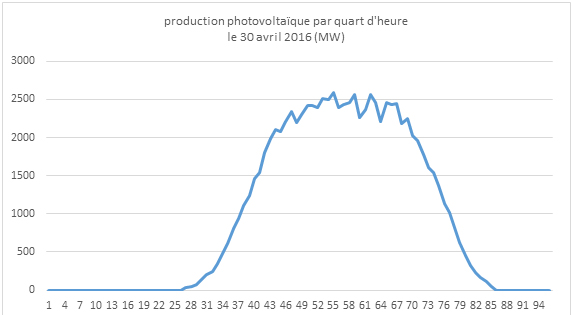 Even though these two days were only a week apart, there is a difference of 10% in total energy production, that is to say the area beneath the curves (79,500 megawatt hours (MWh) on 23 April, 89,700 MWh on 30 April). Furthermore, instantaneous fluctuations, which would be insignificant in an industry where the product can be stored, present serious balancing issues to electricity grid operators.

With these irregularities more or less well predicted by weather forecast services, if consumers do not want to or cannot change their behaviour, it is the production process which has to adapt to behaviour. We need power stations which are able to meet the residual demand not met by renewable energies which, by law, must be prioritized. Back-up power stations must therefore be able to absorb both the cycles and peaks and troughs of renewable energies, from both a technical and financial perspective.

On a national level, futures markets, as well as day-ahead and intraday markets, and adjustment mechanisms controlled by the system regulator (often responsible for high tension transport, such as RTE for France) benefit from the proliferation of hydraulic and thermal reserve plants as well as some demand-response and import-export capacities. For distributors, whose business model is moving towards managing a marketplace with local energy injection and consumption, things are more complicated. Indeed, in addition to the energy coming from transformers, they must manage energy shortfalls and consumption peaks with tools only available in the area they have in charge. To avoid having to invest in expanding the network, distributors must rely on flexibility mechanisms: industrial and other demand-response programmes, small electricity generators, storage or capping renewable energy production.[5]

Wind and solar power have operating costs of close to zero. Introducing them onto electricity markets therefore reduces prices and can even make them negative.[6] Traditional producers see their operating margins reducing to the point of not being able to cover their fixed costs. This leads to closures of plants or, if the owners believe their loss of profitability is temporary, plants being mothballed. The capacity mechanism which is currently operational in France[7] should provide additional remuneration to avoid these types of foreclosures. But there is no guarantee that it will ensure the needs for flexibility are met. In effect, the capacity mechanism finances oak trees, whereas we also need reeds which are able to adapt almost immediately to changes in weather conditions. At the end of the day, it is, of course, the energy consumers and / or taxpayers who foot the bill to build and maintain flexible equipment, for example pumped hydroelectric energy storage stations. But how to organize resources and roles? As always, there are two extreme options, and all sorts of combinations in between.[8]

In the centralized solution, the system manager calls up regular reserves which are automatically available in a matter of seconds, or complementary reserves which are available in a few minutes. These services are remunerated on the basis of regulated prices. In this organizational model, incentives for flexibility come in the shape of taxes (in France an additional CSPE component).

At the other end of the spectrum, the actors are left to organize themselves. Some analysts believe that flexibility has no more reason to be remunerated on top of energy than capacity does. If energy markets were open and had no antagonistic regulations, investors would naturally be encouraged to set up thermal plants combined with carbon storage units able to respond to fatal fluctuations in energy [9], and users would equip themselves with the means of producing flexibility, for example, with batteries.

Half-way solutions include the organization of a flexibility services market. To set up such a market, it is necessary to define a category of actors who will be required to used these services. For example, large producers of wind power could be required to guarantee levels of supply, which would force them to acquire insurance from producers of flexible reserves. The price of these services would be added to the production costs for wind and solar sources to determine their value on the wholesale energy market.

Without knowing where this figure comes from, one often reads that 20% is the level at which the penetration of intermittent power sources starts to create issues for the stability of the grid.[10] Given the objectives set by the European Commission (growing the share of electricity produced by renewable energies from 25% to 50% by 2030), storage and flexibility of production and demand become imperative. Incentives for flexibility services, whether on the demand or the offer side is therefore a priority issue which must be solved at the lowest possible cost to consumers. The question is whether additional remuneration is required or simply for energy markets to be allowed to function without impediments. The risk is that this question will be answered in a paternalistic manner. The gods will probably choose a very secure, and therefore a very expensive solution.

[1] Flexibility is the ability to balance rapid variations in the production of renewable energy and prediction errors in an electricity grid. Until the 2000s, prediction errors determined the need for flexibility. For the past 15 years, the growing place of renewables in the energy mix increases the demand for flexibility. "Flexibility options in European electricity markets in high RES-E scenarios", Institute of Energy Economics, October 2012.

[3] With an automatic tracker system, the orientation of panels can be adjusted (ideally on two axes to take into account the season and the time of day). The idea is to place panels in an optimal position in relation to the angle of the sunlight, which can increase production of energy by up to 30%.

[4] The coefficient of variation is the ratio of the standard deviation to the mean.

[8] For a detailed review, we refer to Dominique Finon (2014) "The markets' need for flexibility: adapting the design of electricity markets to the production of renewable energy", Revue de l'Energie, November-December (622), pp.477-494.

[10] In Non-interconnected zones (ZNIs) the ministry in charge of energy has capped the power from intermittent energy sources at 30% of overall power on the network (law of 23 April 2008).