Digital payment technologies have the potential to vastly improve financial and public services for the world’s poorest. In 2020, TSE launched the FIT IN Initiative to inform the design and regulation of such systems. A new working paper by former TSE researcher Hélia Costa, fellow OECD economist Mauro Pisu, and Vatsala Shreeti, who recently completed her PhD in Toulouse, demonstrates how economic research can guide the decisions of policymakers and pioneers in this complex, fast-changing arena. Following a unique event that increased the costs of using cash in India, they study its impact on the use of mobile phone-based financial services.

Why are developing countries often keen to promote mobile money?

Digital financial services (DFS), including mobile payments, banking, and finance, can improve financial inclusion, by providing access for poorer households and helping to bridge the financial gender gap. Governments can also use DFS to facilitate the delivery of public services, and to address tax evasion and informality. Mobile-based solutions offer often quicker and cheaper ways to expand DFS than traditional banking infrastructure.
However, governments must also target the digital divide between men and women. In 2018, despite a swiftly evolving digital landscape, Indian men were still twice as likely to own mobile phones, access the internet or use mobile transactions.

Why did events in India in 2016 spark your interest?

On November 8, the Prime Minister of India suddenly announced that the two highest denomination currency notes (Rs 1000 and Rs 500) were to be withdrawn with immediate effect. New currency was to be issued in the denominations of Rs 2000 and Rs 500. People had less than two months to exchange old currency for new notes or deposit old currency in their bank accounts. The policy aimed to reduce corruption, tax evasion, and counterfeit currency.
The total value of currency that could be exchanged or deposited in banks had strict limits. As a result, 87% of the value and 75% of the volume of the currency in circulation was wiped out. Caught off-guard, both the Reserve Bank of India and commercial banks struggled to stock ATMs with new notes. With cash being used for over 95% of India’s transactions, the economy was hit hard: in the final quarter of 2016, GDP and employment fell by 2%.
However, output declined less than the currency circulation, which suggests that some individuals substituted cash with other forms of payment. In the two months following demonetization, debit card usage increased by 72% per month, and platform transactions grew by nearly 47%. There was also a corresponding increase in the number of point-of-service terminals for electronic payments.
We then asked ourselves what could have been the impact of this temporary cash shortage on the adoption of mobile financial services. We wanted to know if any shift from cash to mobile financial services would be long-lasting, and whether men and women would respond differently (given the large gender-based digital divide in India).

How do you measure the impact of demonetization?

During India’s demonetization, people had only one way to deposit or exchange old currency notes for new ones: using banks. But many people, especially in rural areas, may not have easy access to banks’ services as bank branches can be few and far between. An individual’s distance from a bank branch is therefore a good measure of her exposure to the demonetization shock. Our hypothesis is that the further away an individual lives from a bank branch, the more exposed she would have been to the shock, increasing the likelihood to start using mobile-based financial services (all other things being equal). We then used detailed survey data published by Financial Inclusion Insights to look at individual behavior before and after the demonetization event, comparing the adoption of mobile services by people living further from bank branches with those living closer.

What do your results reveal? 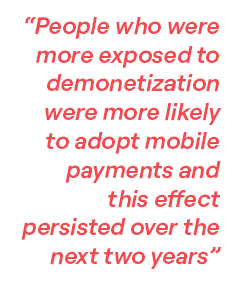 We find that people who were more exposed to the shock (living further away from bank branches) were more likely to adopt mobile payments and this effect persisted for the next two years.
Demonetization increased the probability of using mobile financial services for both men and women. Strikingly, in the high-exposure group the marginal effects on women were twice as large as on men. Our ongoing work seeks to explore and explain the mechanisms driving this difference. However, data limitations did not allow us to include this in this study. Nevertheless, our results contribute to understand user behavior and the persistence of habits, with important implications for the design of policies aimed at increasing the uptake of digital payment technologies.

FURTHER READING ‘Short Term Cost of Cash and Mobile Financial Services: Evidence from a natural experiment in India’ by Hélia Costa, Mauro Pisu and Vatsala Shreeti is available to read here on the TSE website.

More information about the FIT IN Initiative available at tse-fr.eu/groups/FIT-IN-Initiative.

What is the fundamental value of cryptocurrencies?

Competing for the common good

Free Market or Socialism: Have Economists Really Anything to Say?