Transport infrastructure: Ukraine, on the road to recovery

It has almost been a year. In February 2022, Vladimir Putin ordered the invasion of Ukraine. Ever since, intense fighting between the two countries has not stopped. Millions of lives have been shattered. And in the meantime, Ukraine is being destroyed, entire cities are reduced to ashes and so are infrastructures. If it is hard to say for now which turn the conflict will take, it might already be time to reflect on how to rebuild Ukraine.

TSE transport specialist, Marc Ivaldi, Scientific Director of the Division of Social Sciences and Humanities at the French Ministry of Higher Education and Research (EHESS), has contributed to the latest CEPR report, published in December 2022. He co-authored with Volodymyr Bilotkach, associate professor in Aviation Management at Purdue University (USA), a chapter dedicated to ideas for bringing Ukraine’s transportation networks back on track.

$40 billion. This is the estimation of the overall damage to the Ukrainian transport infrastructure in December 2022. Roads, railways, ports, and airports have all suffered great destruction.

We believe that reconstruction of transportation infrastructure ought to have a dual focus: if we set aside reconstruction, the institutional framework is also especially important to ensure infrastructure and services are run as efficiently as possible. There must be an entire system of regulations and procedures that will shape the socioeconomic activities in transport. These regulation reforms should be evidence-based to have an actual impact. 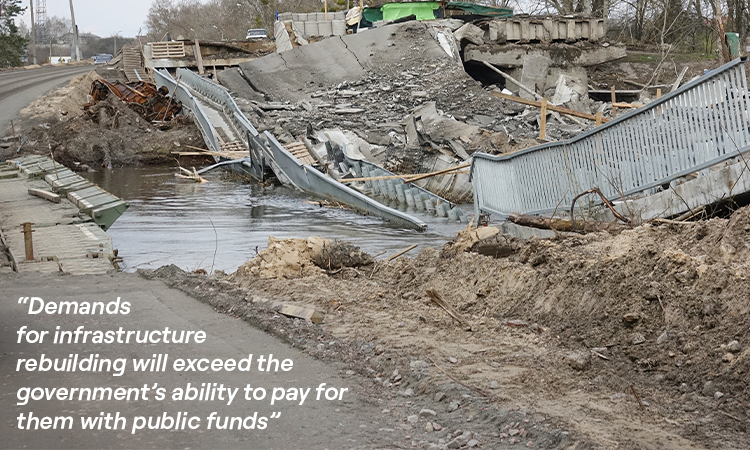 As for the cost of this reconstruction and its requirements, it is difficult to estimate at this stage since the war is ongoing. Demands for infrastructure rebuilding will obviously exceed the government’s ability to pay for them with public funds. Our recommendation would be to use private public partnerships rather than privatization. There will also be a need for robust economic regulation, which will differ depending on the type of transport infrastructure.

For instance, regarding railways, we suggest sound economic regulation of the infrastructure provider, using incentive regulation mechanisms, as well as the use of robust data analysis for decision making. Railway services are operational across the entire territory under Ukrainian government control and are quickly restored following de-occupation. We advocate for improving connectivity within the country and changing the track gauge, aligning with the standard gauge predominant to Western Europe.

As for Ukraine’s highway network, it has seen considerable investment in the years prior to the invasion. Private sector investments have been used, an appropriate framework is hence already in place and can be a good starting point for further investments. However, we can expect investors to apply pressure to introduce user charges. That is why we view tolls as the most efficient way.

Some airports have sustained considerable damage, yet air service to the nation’s key gateways can be restored promptly once safety can be assured. The aviation sector was well integrated into the European ecosystem before the full-scale invasion. After the war, some considerable infrastructure investment will be required to rebuild several damaged airports. Private sector funds can be deployed through either privatization or concession arrangements.

Lastly, ports, especially those on the Sea of Azov, have sustained more damage than other parts of transportation infrastructure. After the war, we will see increasing demand for private sector investment. We believe that separation of infrastructure and services will be the institutional model of choice for the ports, based on European experience.

Post-war Ukraine will be a country on its way towards European integration, with minimal links to Russia. At the same time, the country will continue to face the threat of another Russian assault. Prospective NATO membership may make full-scale invasion unlikely, but it will not preclude hybrid attacks of some form. Post-war transport infrastructure needs to be rebuilt and reformed to reflect this reality.

The full report is available to read on the CEPR website.

What future for motorway concessions?