The posthumous Ph.D. defense of Harsh Malhotra,  « Three Essays on Social Inequality, Institutions and Development», will be organized on Thursday, July 4th at 10 am (MF 323).
This defense will be our way to pay tribute to Harsh who died precipitously at the age of 30. 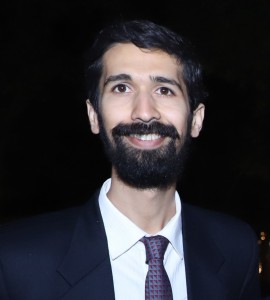 This dissertation focuses on how social inequality shapes the character of institutions and the role they play in economic development. Using nationally representative survey data from India, the papers here study how gender and caste based divisions play out across diverse domains: healthcare, political economy and violent conflict. In so doing, the papers shed light on key questions concerning these institutions themselves: on the design of demand-based health programs, on the ability and limitations of local democracy to improve public services, and on the relation between economic change, social norms and violence. They also contribute to our understanding of social inequality and its persistence in developing countries like India. Why does economic development often leave women and vulnerable minorities behind? What challenges do institutions face in balancing their raison d’etre on the one hand and ensuring inclusion of vulnerable groups on the other hand?

The first chapter evaluates a conditional cash transfer program, Janani Suraksha Yojana, which drove a large expansion in the use of public health facilities by mothers and their newborn children. The program did not improve children’s mortality (as previous research documents and I confirm). I focus on understanding why. Using birth-histories from the Indian Human Development Survey (2011 and 2005), I estimate within-mother effects of the staggered arrival of the program across districts in India. The key finding is that families’ preference for sons over daughters has an important bearing on the program’s effects, especially in regions where the health system is less developed. A triple- difference strategy reveals that in less developed regions, families that were more likely to desire a son - those with no sons at baseline - increased fertility in response to the program, and, exhibited an worsening of newborn mortality for daughters under the program (not for sons). This highlights a challenge for demand-side interventions for healthcare: the character of demand may reflect social biases that undermine children’s health in the first place.

The second chapter examines the ability and limitations of local democracy in making public services, like healthcare, accountable to citizens. I study the experience of elected village governments (Panchayats) in supervising local health centres in India (since 2005). I document a robust empirical pattern. In villages where panchayat leadership gets exogenously reserved for women or scheduled castes, health centres function badly in a basic way: medical workers are more often absent. I provide evidence that his relationship is causal, reflecting differences in how well panchayats supervise health centres around them, in turn reflecting possible differences in how “powerful” is thes leader. The negative effect of gender / caste reservation is found exactly in those health centres where panchayats have a meaningful supervisory role. And is strongest where women / scheduled castes face particularly adverse gender / caste relations respectively. Our findings suggest that governments’ ability to make elite state officials accountable may depend on electing “powerful” leaders. Unequal societies face a sharp trade-off herein, between electing a powerful citizen to deal with state, and, increasing the representation of marginalised groups.

The final chapter studies a key aspect of improved living standards: freedom from violence. Using data from a nationally representative sample of nearly 39,000 households (IHDS 2011 and 2005), I document the specific vulnerability of historically marginalised scheduled castes, Dalits, to attacks/threats. In 2011, a dalit household is around 40% more likely, on average, to report at- tacks/threats than any “upper caste” group, even in within-village comparisons, and with various controls including for reported attacks/threats in the previous survey round. The evidence suggests that historical social divisions and present-day economic insecurity are closely related to violence against dalits. A dalit household is more likely to report attacks/threats relative to others in especially those villages where hamlets are “caste-segregated” (reflecting deeper historical divisions), than in “mixed-villages” or in urban areas. In places where “upper-caste” but low-wealth households experienced slower economic growth during 2005-2011, dalit households report greater violence not only in absolute levels but also relative to other groups. Although not causal, these are striking patterns, consistent with the hypothesis that economic insecurity among elites may aggravate violence against minority groups.