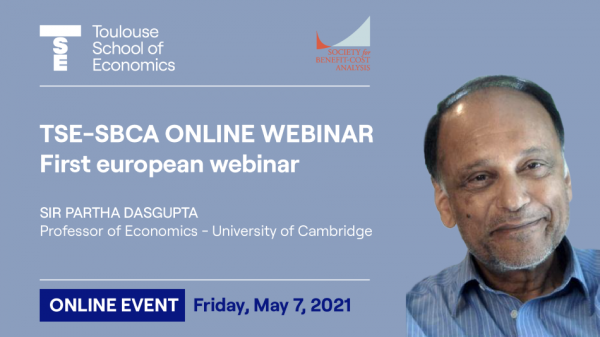 The Society for Benefit-Cost analysis and TSE are proud to co-host this first European webinar: “Economics of Biodiversity: The Dasgupta Review”

Documents relating to an independent global review on the economics of biodiversity led by Professor Sir Partha Dasgupta.

Discussant: Johan Rockström, Director of the Potsdam Institute for Climate Impact Research and Professor in Earth System Science at the University of Potsdam

SBCA was founded in 2007 and works to improve the theory and practice of benefit-cost analysis and support evidence-based policy decisions.
More information : https://benefitcostanalysis.org

The society’s journal is the “Journal of Benefit-Cost Analysis" and it organizes its annual conference in Washington DC (under normal circumstances).
More information: https://www.cambridge.org/core/journals/journal-of-benefit-cost-analysis