Are women under-represented in European economics?

This article has been written by Emmanuelle Auriol, Guido Friebel and Sascha Wilhem.

Despite around a third of PhDs in economics in the US having been earned by women over the last few decades, under 15% of full professors in the US were women in 2017. This column uses data scraped from research institute websites to investigate whether a similar ‘leaky pipeline’ exists in Europe. It finds that in comparison to the US, European countries have a higher share of women full professors in their research institutions, but the attrition rate between junior and senior ranks is comparable on both sides of the Atlantic. There are important differences throughout Europe, however, with the Nordic countries and France scoring much higher on gender equality than, for instance, Germany and the Netherlands.

Women are under-represented among academic economists. For instance, in 2017, only 13.9% of full professors in the US were women, despite the fact that over the last decades, between 30% and 35% of PhDs in economics have been earned by women (CSWEP 2017). The large gap between the percentage of women holding a PhD and those who are eventually go on to become full professors has been interpreted as evidence of a ‘leaky pipeline’ in which, over the different stages of a career, the attrition of women is higher than that of men (Bayer and Rouse 2016, Lundberg and Stearns 2019). An important concern with the leaky pipeline literature is that most of its evidence comes from the US.

To learn more about the situation in Europe, the Women in Economics (WinE) Executive Committee of the EEA sponsored a web-scrap data collection by the two of us who are based at Goethe University, Frankfurt (Friebel and Wilhelm 2019).1 One problem with the European academic market is its lack of standardisation in labour management practices, titles, websites design, and so on. After web-scraping the websites of research institutions, we carefully separated the data entry of non-academic from academic staff, and then translated the multitude of different titles (more than 1,000) into a simple hierarchy of positions in descending order: (full) professor, associate professor, assistant professor, lecturer, research fellow, research associate.

In a recent paper, Auriol et al. (2019) exploiting this new dataset, we seek to (1) provide an answer to the question of whether the situation in Europe is similar to the US or whether there are important differences, (2) investigate to what extent there are important differences within Europe, and (3) study when exactly the leaky pipeline starts.

reveals that there a leaky pipeline in Europe, too: from more than 40% at entry level, the share of women falls to 22% at the level of full professor. In comparison to the US, European countries have a higher share of women full professors in their research institutions, but the attrition rate between junior and senior ranks is comparable on both sides of the Atlantic.

Although in all countries, the proportion of female researchers at all levels is much higher than at the full professor level, Figure 1 shows that there are important differences throughout Europe. The Nordic countries and France score much higher on gender equality than, for instance, Germany and the Netherlands. This may partly owe to historical and institutional reasons (the formerly socialist countries, for instance, score particularly highly, possibly because economics was a rather a ‘female’ occupation during socialist times). However, it may also be partly driven by other factors, such as recruitment policies related to the ranking of the research institution, which is next measured through research output from RePEc.

Figure 1 Percentage of women in the position of full professor. 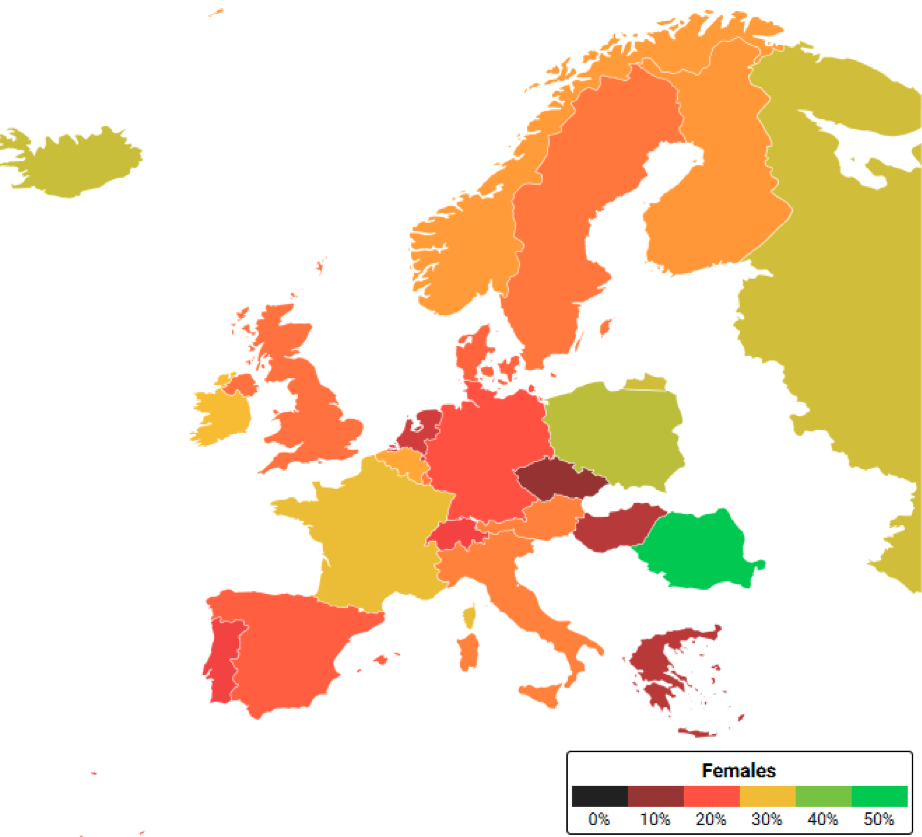 Comparing the top half of the top 300 institutions in terms of research output on Repec with the bottom half, Figure 2 shows that at the full professor level, the better institutions have fewer women researchers. This could be interpreted as evidence of the leaky pipeline.

However, the figure also shows that at the junior (entry) level, the more prestigious research institutions in Europe hire significantly fewer women than the less prominent institutions. The mode for the bottom half of the top 300 research institutions is much higher (around one third) than for the top half (around 15%) for the full professorship level. Surprisingly, the gap is of similar magnitude for the entry level. This suggests that the leaky pipeline is only one part of the story, or that the leaky pipeline may start much earlier than is usually considered (notably, at the transition between graduation and first job). This result that has not been documented in the literature, and it remains to be seen whether the same is true in the US. 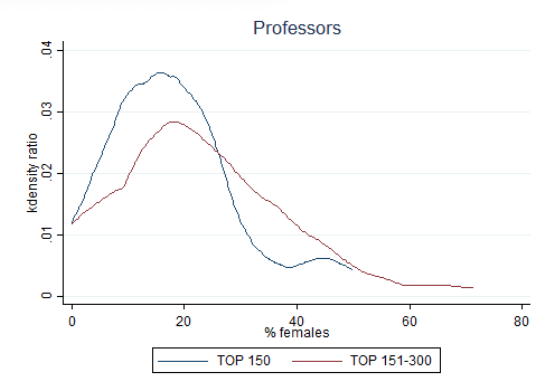 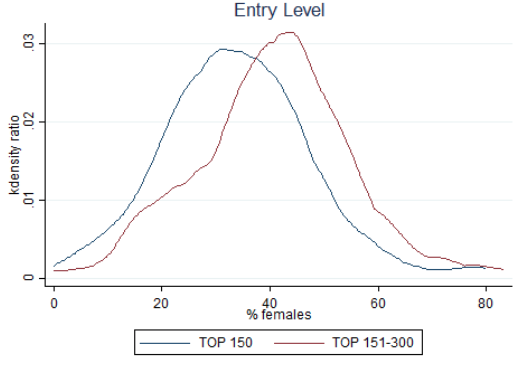 In conclusion, the data reveal that in Europe, there is a leaky pipeline. As we show in our paper, a cohort effect explanation cannot explain the current numbers alone. Furthermore, it does not explain why economics is an outlier compared to other social sciences and STEM fields with similar requirements (Ceci et al. 2014). We argue, though, that it may have to be complemented, because higher ranked universities are employing women to a lesser degree than lower ranked universities even at entry level.

How can this be explained? It is hard to believe that women are not as ‘good’ as men when graduating (if anything, they are more successful). Hence, the early difference is likely to be caused by, or during, the process of matching graduates to research institutions. It cannot be excluded that part of this could be driven by unconscious biases against women. Another possibility is that women may tend not to apply for the best academic positions, perhaps because they lack confidence or encouragement by placement officers and their advisors. In fact, letters of recommendation written for individuals applying for academic positions use different adjectives to describe men and women, with adjectives used to describe women viewed more negatively in hiring decisions (Madera et al. 2009, Schmader et al. 2007)

To find out whether this is the case in our profession in Europe, we would need data from the hiring committees of as many research institutions as possible – a hard, but not impossible task. Another possibility is that women apply but do not get selected by the good research institutions, which again could be tested with such data.

Machine learning and the law

The power of ideas